There is the old adage of putting the cart before the horse, and it pretty much means that it’s not a logical or fruitful thing to do.  First things first, so to speak.  Well, in this case, it was putting the cart before everything else.  And by cart, I mean the concept, the look, design, and plan for animating the short film The Go Cart.  Enter Bobby Bennet.

I had the pleasure of working with Bobby over the course of the last couple of years. I was amazed by his talents and encouraged by his creative potential.  Bobby served as Animator on the film.  That title encompasses a whole lot more.  As the director, he was my lead actor. But, he was also the lens, the magician of light, the set dresser and ultimately the master of our creative team.  I could say a lot more, but he does it much better.  Meet Bobby Bennett, one of the main reasons why The Go Cart got to roll.

Tell us a little something about yourself (where you grew up, what you were interested in as a kid):

I was born and raised in a suburb in Illinois about an hour outside Chicago. I enjoyed movies, making them and watching them. Drawing was also big for me and has at times gone hand in hand in filmmaking (as it did with animating The Go Cart). I also loved tinkering around with trying to invent stuff  which often meant taking apart toys I didn’t care for as much and seeing I could stitch them together like little Frankenstein creations. Usually, it didn’t amount to much but it was fun nevertheless. In some ways, that mentality hasn’t changed a whole lot. The desire to try something new was always close at hand.

Why did you want to be a filmmaker/artist?  Influences?

I think something I really love about filmmaking is all the different mediums it can bring together to tell a story. When done well it can be a breathtaking marriage of sound and image and I guess for me it’s hard not to want to be a part of that. So, there’s a love for the medium. But, passed that I think it’s an incredible stage to say something that’s meaningful to you in a creative way and hoping others resonate with that. I’m personally excited to figure how to take what I believe and value and bring that to life through engaging stories that start a conversation with someone who will continue that conversation with their friends and in their own head long after the credits have rolled. To name a few influences I love the work of Christopher Nolan, Stanley Kubrick, David Fincher, and the Coen Brothers. But non-film influences could be anyone from writer C.S. Lewis to the band Twenty One Pilots. There are so many ways to communicate a message creatively and it can be so exciting seeing how others, whether filmmakers or writers or bands or anyone can find ways to do that.

What inspires you to create?

There’s a lot of inspirational things out there whether “artistic” or not. Personally, my faith is the driving component that gets me wanting to create. Knowing there’s a need for well-told stories that can help us look into ourselves and what we believe about the world and each other sounds like one of the coolest challenges to take on. But I mean, to just see anyone take a certain task or craft and do it well and creatively can be really inspiring and make me want to join in on the process. Whether that’s a good song, a well-written book, a fascinating movie, or even the way someone holds an everyday conversation and chooses to live life. I think that’s what can be so cool about inspiration is it can from about anywhere. But you probably got to be open to believing it can come from about anywhere or you might pass up some really valuable albeit unexpected sources of inspiration.

What drew (no pun intended) you to The Go Cart (artistically and maybe, personally)?

What drew me to The Go Cart is I honestly just wanted to see what I, someone who had not animated before, could do. I remember being very interested in animation since I was young, whether stop motion or hand drawn (remember the flip books you’d make in class when you got bored in grade school?). I also had the ability to draw along with some After Effects experience and so what could go wrong?  It was a fun and unexpected chance to give a shot a childhood dream. A huge plus was it’d be with people whom I’ve worked with before and who were very encouraging as well as open to ideas I’d have. Overall, it was creatively engaging but also very challenging, especially once I got back into the school year (Bobby finished up his degree this past year from Ball State University majoring in film and media studies) I’m glad to see it finished and to have a chance to step back and see what all this work from various people has formed into. 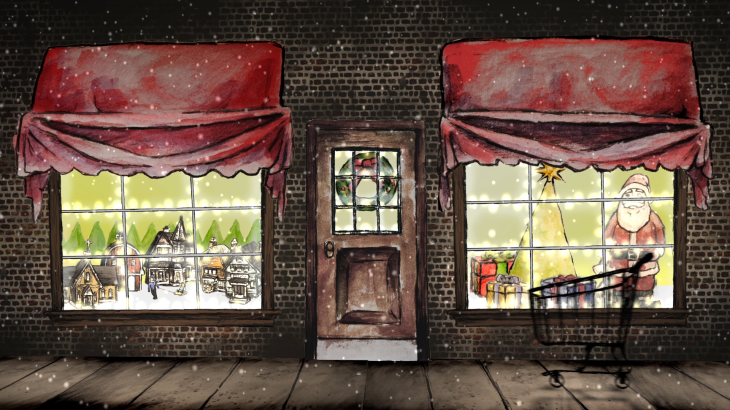 What was your process like for creating the images for The Go Cart?

The process for creating the images was a bit rough, but once streamlined it worked fairly well. So, I would draw the pictures on paper, whether they be the characters or the setting/background. Then I’d take a picture, upload them to my computer, bring them into After Effects, and go through a not so perfect process of keying out and rotoscoping the white paper background from the actual character. Sometimes it was easier, such as with the cart, because it was one consistent color and I could just key out the white paper, leaving the cart only. But when it was a character drawn with multiple colors I’d have to actually make a mask around the shape of the character. Then each character, element, and background image would be turned into a 3D layer in which I would create a 3D camera and lights within After Effects and animate from there. Frame by frame animation was used very little and it most of it was key framing with single still images, since I didn’t have a lot of experience myself with that kind of animation and also because I was the sole animator.

Was there a time you ever felt like the cart?  If so, tell us a little more about it.

I don’t know if I ever consciously felt like the cart. I mean, I suppose looking back at production and seeing how much longer it took than expected (especially for someone new to the animation process) it probably felt something like what the cart felt when it started its journey. Long, unexpected, but full of learning!

What are you working on now?

Right now I’m working as a Creative Arts director at Union Chapel, a church in Muncie, Indiana. So, that entails anything from videos (announcement videos, creative shorts, recap videos) in service  to even doing stuff like stage design. Other projects as far as freelance include anything from commercials to photography to even finishing up my first coloring book design! So, quite a variety, which I enjoy.

Hope anyone who gets a chance to watch The Go Cart gets something out of it. We tried our best to put a lot in!

To watch the trailer, visit us on Vimeo.  And to learn more about the film, visit our facebook page.

I believe in magic and miracles, but I don't think either happens when or how we want them to. I love looking up and down but try not to while I'm walking. I'm a writer, filmmaker, and a cheerleader for my friends' dreams. And I try not to wish nightmares on everyone else. I believe that creation is the only original concept and everything else is a re-write. I hope that my drafts make a difference. View all posts by krwaters